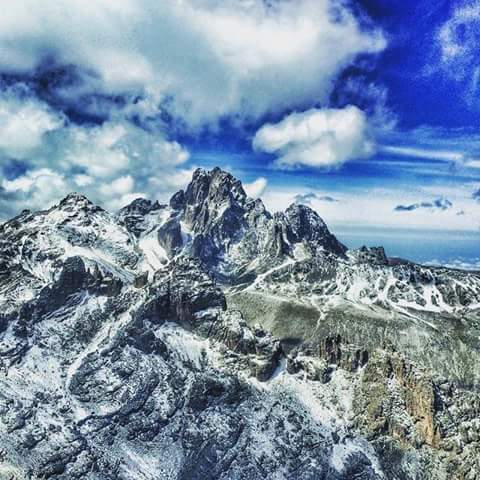 Mt. Kenya is a large fairy symmetrical volcanic cone. Its diameter at the base averages 120 km. It was formed between 2.6 and 3.1 million years ago by eruptions of successive layers of lava and agglomerates from a central vent in the earth’s surface. The lavas were formed by the relatively quick outflow of liquid rock; Agglomerates are composed of a mixture of coarse and fine particles that originate from a violently explosive eruption in which shattered fragments of rock are thrown from a central vent and fall on the slopes of the cone, eventually undergoing consolidation into rock.

A fine example of his type of formation can be seen on the trail down chogoria route.

Estimates show that the original volcano was 7,000ft tall. Supposedly, it  had a summit crater just like the  Kibo cone of Kilimanjaro.

Nearly 2000ft has been eroded by glaciers the original upper parts have been worn out leaving a jagged glacial topography. This is characterized by the following relief features:-
1.Aretes-Knife edged  ridges
2. U- shaped valleys
3.Rock basins some filled up with glacial lakes called tarns,

The lower slopes of the cone are crossed with many steams etched on steep sided valleys forming a well defined radial drainage pattern. All the streams on the north and north western segment of the mountain drain onto the Ewaso Ngiro River. The rest drain onto the Tana River to finally join the Indian Ocean.
The two highest peaks of Nelion and Batian are part of the neck or plug of the volcanic rock that cooled slowly below the surface in the upper part of the vent as the eruption ended. They are composed of the rock “Nepheline” or “Keynite”. Which is a grained intrusive igneous rock of the hyper-byssal category.

Now let’s check out the following technical-sounding terms.
•    Igneous-Formed through a heating process pompous
•    Intrusive -the magma cooed and solidified below the surface.
•    Hyper-byssal- refers to the relative shallowness of the depth under which it cooled.

This rock varies in color from pale-grey through grey-brown to red. It often contains large white crystals of feldspar and smaller crystals of nepheline.
The rocks on the lower part of the cone are of various types of lava and agglomerates. Many contain crystals of feldspar that has weathered out of the rock and can be conspicuously found “littering” the ground.

Activity from the central vent ceased about 2 million years ago but the side or satellite   cones continued to erupt mainly on the east and north eastern slopes. One example is the “Giant billiard table”, “Mugi" Hill and “Ithangune” hill that are visible as we climb up along Harris tarn and all the way up to Lenana. Another 60km to the east are the” Nyambene” range, a series of basalt cinder cones that formed as recent as 100,000 years ago.

During the period when global climates were significantly cooler than they are today & large ice-sheets covered much of northern Europe and Canada, the glaciers of Mt. Kenya would have extended to as low as 3000m! The erosive work of those glaciers was responsible for the cutting of the deep U-shaped valleys around the slopes of the cone. Within those valleys, we can see various types of moraines such as, lateral, medial and terminal ridges or lines of boulders & gravel that represent the load of eroded material, carried within and under the glaciers. The elevation of those moraines provides evidence as to the previous extent of the glaciers.

Very little is known about the various episodes of glaciations and the stages of the retreat of the glaciers but they were probably at their largest about 18,000 years ago, the last glacial maximum. They may have begun to re-advance about 170 years ago (The little ice-age)
But since then, the glaciers have retreated very rapidly.
In 1893, Geologist J.W. Gregory started the scientific recording of Mt. Kenya glaciers. Thereafter, they have been under constant monitoring and recording through work started by S, Hastenrath and R, Caudwell. Their findings show that the glaciers are retreating at an ever accelerating rate the “snouts” are retreating and also the volume decreasing. It is estimated that if this rate continues, there shall be no permanent ice left on our beloved mountain.  Example, since Gregory did his first recording, 8 of the 18 glaciers recorded have disappeared!

This email address is being protected from spambots. You need JavaScript enabled to view it.